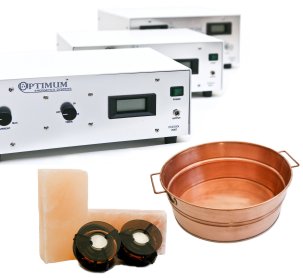 Array is slightly easier to replace than Aqua Chi and Q energy Spa. But folks lets look at their therapeutic efficacy….anything special about this company and their equipment? They do a much better quality power supply and reduction of AC trickle.  It is probably a higher amp footbath then Aqua chi and Q Energy Spa.

What is my biggest issue with this brand?

They refuse to answer my simple question about what is the fuse rating on their units both residential and commercial . In fact they asked me why I wanted to know and that it isn’t important. Really? Then why does every other credible footbath brand offer this information?

I need to know this information because running a higher amp footbath but with a low amp fuse can mean it will burn it out faster. Sure some brands can squeeze out more amperage but doesn’t mean its a good idea with a low amp fuse..Legally only baths with a max 5.5amp fuses can be sold. So if they are running footbaths at their 5amp mark or higher like they claim this could be maxing it out. To my knowledge only the brand D Tox Monster can you swap out the fuse for a higher one after it is purchased.

Even if there is no issue with their fuse why are they being so shady about answering me and even more shocking they didn’t actually have the answer to a pretty basic question when it comes to these types of devices.

They also tried to sell me on the concept of their Copper footbath which is very expensive to replace and ofcourse copper oxidizes quite rapidly.

They have no idea how real science works in this portion of the design. All this causes is the negative polarity field from the array to arc and ground out directly into the metal copper tub! We don’t want all that potential DC field to be grounding out on the bucket we want it to all be concentrated and arcing directly into the feet!

One also has to check with a heavy metal hair analysis if they are already high in copper as some people are as this as well as copper piping in a house can overwhelm a person with absorbing too much copper. So they tried to sell me on accepting the idea that even though their power supply and machine produced 3-5 amps (depending on if you get commercial unit or not) that the amperage in the water was actually or could go higher due to the copper tub potential the energy. That deserves an LOL. If the charge in the water does go higher then the power supply and fuse has to be able to handle it so unless they can prove to me their device can handle beyond 5.5amp then they are simply lying.

Consumers may not know that it is not legal to sell a foot bath higher than 5.5amp fuse on it so claiming they can achieve higher than this due to their special footbath is not a good thing to claim…all that means is you run the risk of blowing your fuse or damaging the power supply over time. They know perfectly well this is not true otherwise they would be having to deal with a lot of servicing and repair issues due to their copper tub raising the amperage past the threshold.

Conclusion is their equipment is one of the few brands that are higher than most but they left me with a real bad taste in my mouth due to the above questions and concerns.