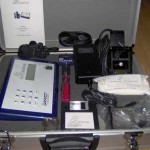 Just another low amperage footbath but the difference with this company is that they are one of the strongest with their marketing efforts.

No real therapeutic difference by the way between the commercial and residential models except that you can run two low amperage footbaths at the same time!! The power supply for them two allow for that is going to be pretty much the same (1amp+1amp=2 amps or 1.5+1.5= 3amps max…big deal) so basically they are just providing you with an additional array for an additional cost differential of $900!!! Now ask them what a replacement array would cost and you will see the huge discrepancy. Pretty dishonest if you ask me.

AS far as customer service is concerned its very good and I do like all the people that work for the company they are very sincere. It’s too bad they won’t consider actually improving their footbath and lowering the cost a bit.

They do try to sell people on the concept of the dual polarity(other companies do this as well). But here is the truth:

Dual Polarity, or reversible polarity, machine is just the reversing of polarity. Dual Polarity is a marketing gimmick and provides no benefit. This is why:

By reversing polarity, the plated material on the anode gets released back in to the water (explained further below) from the current footbath & previous footbaths. Obviously this is not a good thing.

FALSE CLAIM: Systems that use Dual Polarity claim that their systems change the PH level of the water depending on the supposed Polarity. REASON FALSE: The only way the PH level can be altered is if the ionized water is extracted either at the Anode or Cathode rings where the H2O has split is extracted in to H+ (acidic water) or OH- (alkaline water).

EXPLANATION Why DUAL Polarity is a hoax:

1. To further explain how this works you must first understand how DC (direct current) current works

DC CURRENT: ALL Footbath electrolysis units on the market are using DC current. They either run from an AC input or a battery input (a battery is DC). This is necessary to create the electrolysis process. Direct current or DC electricity is the continuous movement of electrons from negative to positive through a conducting material such as a metal wire or in the case of the footbath it is the water. A DC circuit is necessary to allow the current or steam of electrons to flow. The current ALWAYS flows from the negative (Cathode ring) to the positive (Anode ring) through the water. When the electrons move from the Cathode ring to the Anode ring it causes the Cathode ring to deplete and then binds with molecules in the water and then moves to the Anode ring creating a plating on the Anode ring (refer to our research page showing the scrapings of the Anode ring click here). When a machine switches polarity ALL THEY ARE DOING is changing which plates receive the positive and the negative. The current STILL flows from Negative to Positive. Remember the Cathode ring depletes the metal & the Anode ring attracts where a build up occurs, so when the Anode ring switches to receiving the negative, making it now the Cathode ring, it then releases all the build-up back in to the water. Not only are you releasing the toxins back in to the water but it gains NO BENEFIT. (click here for outside source)

** THIS IS FALSE: A DC current cannot move from positive to negative pole as stated in the negative mode. (explained above)