The second most affordable PEMF with wider therapeutic applications(click here) 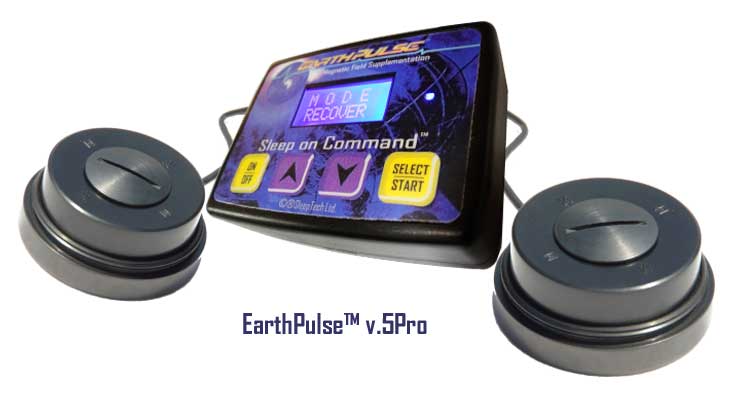 The brand of device is called an Earthpulse. It is a true Biohack whether you use it during the daytime…but in terms of time efficiency it is one of the ultimate biohacks because it exploits what all of us do each day and we spend a 1/3rd of our time doing!….Sleeping.

Light and sound sleep machines, white noise machines or some other forms of electrical stimulation “biohacks” may help you to sleep slightly better, but they have no actual cellular effects – meaning they are incapable of actually healing your cells or restoring your biology from jet lag, sleep deprivation, exposure to excessive electrical pollution, or other daily stressors.

In a nutshell…all other PEMF devices allow frequency settings that are too fast. The Sleep on Command™ features only biologically friendly pulse repetition rates at or below 14.1 Hz (the second recognized peak in the classic Schumann resonance).

Dozens of animal studies show negative behavioral effects when exposed to 15 Hz and over; while 20 Hz and faster caused stress-hormone production in all studies that looked for them. Mat-system ‘revitalize’ programs are simply too high; users confuse being amped-out with being energetic. These devices put brain into high Beta-rhythm;…not good.

If you have ever tried some of the popular high power full body units on the market they can be quite uncomfortable with so much amperage they cause the muscles to contract! This can induce epinephrine dumps in nervous system similar to what caffeine does. We don’t have to shock our systems with high intensity…we need to be more focused with frequency harmonics being used!

The ultimate health hack is achieving the best sleep possible!

EarthPulse system is the only device of it’s kind allowing for all night exposure to entrain brain into deeper sleep, while simultaneously tuning mitochondria for more efficient oxygen metabolism. More energy from every breath of air lowers oxidative stress and promotes cells resiliency to other metabolic stressors like WiFi and other types of RF (radio frequency) which the latter does the complete opposite. Non native EMF especially in microwave range screws with circadian cycling deep in the glands of the brain!

The synergistic effects of longer – deeper sleep with mitochondrion “tuned” for enhanced oxygen metabolism, is a body operating at above normal capacity every day. Enhanced oxygen metabolism means your body gets more energy from lower amounts of oxygen. Saturated blood and tissue oxygen rise. Low tissue oxygen isn’t a result of bad cardiovascular function, it happens because your mitochondria are burning oxygen inefficiently. Inefficient oxygen metabolism increases oxidative load and that results in increased inflammation.

More efficient oxidative phosphorilation (O2 metabolism) results in decreased oxidative stress and subsequently reduced inflammation. Under these conditions the body is able to heal itself more efficiently and truly excel.

Let’s get technically specific about why this device surpasses the therapeutic efficacy then other full body mat or large coil PEMF systems.

Most systems include frequencies that actually cause stress hormone production.

Dozens of animal studies proved that frequencies at 15 Hz and greater caused negative behavioural modification. While 20 Hz and over cause stress hormone production (because of brainwave entrainment to mid-Beta or higher). When using these systems at higher frequencies they confuse feeling amped-out with feeling truly energetic.

Systems that are sine-wave (usually AC), triangular, trapezoid or some other time-varying wave-form have magnetic fields that expand and then contract are NOT pulsed. These variations of PEMF are better than nothing, but not the “bang-for-the-buck” you’re wanting or expecting from such a sizeable investment. ($4-30,000)

A true pulsed electromagnetic waveform has a steep nanosecond rise-time. In other words the electromagnetic field rises from zero, straight-up to it’s peak in nano-seconds. It doesn’t build intensity any less than instantaneously.

A “pulsed” magnetic energy wave travels to infinity, albeit losing roughly 1/2 its amplitude / density / strength per inch as it travels away from it’s source. With a true pulsed electromagnetic wave-form and sufficient amplitude, tissue penetration is never an issue. The EarthPulse™ system is the strongest system under $10,000 and it provides a true pulsed square-wave.

Expanding and contracting fields (sine-wave, triangular-wave, trapezoid-wave) do not travel at all, extending only as far as the increasingly stronger magnetic field expands, and then contracting back again to zero as the signal intensity falls.

What about what the clinical studies and research says?

There is no published data showing any other pulsed electromagnetic field frequency works better than 10 Hz. In the thousands of studies reviewed, 10 Hz (10 pulses per second) appears to provide the most effective. In 2003 NASA proved 10 Hz regenerated neural tissue 4x baseline while slight deviation to either 5 and 15 Hz (a perfect bell shaped curve) dropped tissue regeneration by 1/2 to 2x baseline. The NASA / Goodwin study online was sanitised by removing the 5 & 15 Hz data that was in the study when first released. See our 10 Hz pulsed electromagnetic field therapy bibliography.

So the question is what the heck are all these other PEMF devices on the market doing when not following what all the research is saying!? What they are doing is experimenting on people to aid with their product differentiation marketing and competitive goals.

When applied from under the mattress at night, the EarthPulse™ North-pole, nano-second, pulsed DC electromagnetic square-wave extends through your mattress and through entire body head to toe.

Consider watching these three presentations done below by Dr. Pawluck. If you have any more questions about if the Earthpulse is going to be best for your health conditions and goals especially when used in conjunction with other therapy equipment please reach out to me for free consultation and advisement.